This is an extended version of an obituary by Peter Scott-Presland published in The Independent, 11 September 2012, 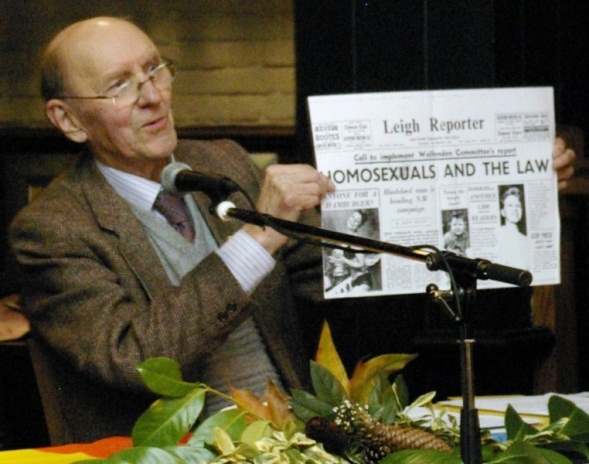 CHE at its height in the mid 1970s boasted over 130 local groups all over England and Wales, and a membership in excess of 5,000 lesbians and gay men. It was the most successful attempt ever in this country to create a mass membership democratic LGBT organisation. And if its legislative gains were small, it changed the lives of thousands of individuals through its groups, encouraging self-respect and self-confidence through ‘coming out’. It also made grass roots gains in changing the attitudes of police, social workers, doctors and teachers to whom it gave talks and distributed information. Indirectly it contributed to the foundation of several other important institutions – LGBT Switchboard, the counselling organisation Friend, the first national gay paper Gay News, Gay Sweatshop Theatre Group and the International Lesbian and Gay Association (ILGA).

The road to this was a long one. Allan Horsfall was born in 1926 and brought up by grandparents in a pub on the edge of the Yorkshire Moors. After leaving Nelson Grammar School at 16, he did National Service in the RAF. It was in an ex-Servicemen’s Club in 1947 that he met his life partner, Harold Pollard, a primary school teacher twenty years his senior. They remained together until Harold’s death in the 1990s. He worked for the Coal Board as a clerk.

Like many of his generation, Allan was radicalised by the government’s treacherous handling of the Suez Crisis in 1956. He joined the Labour Party and within two years found himself to his own surprise elected as a local councillor in Nelson, in a landslide victory that gave all the council seats to Labour. By 1960, he was trying to get a motion through his local association, calling on the Party to adopt implementation of the Wolfenden Report as official policy. Wolfenden had recommended the decriminalisation of consenting homosexual acts in private in 1957. Caucuses and procedural chicanery blocked him at every turn. This was at a time when many worthies objected to the mere mention of the subject in the presence of women, who were also often asked to leave the public gallery at gay sex trials.

Allan supported the Homosexual Law Reform Society (HLRS) from its inception in 1958, but was frustrated at the lack of involvement of supporters – never members - especially outside London. After several years spent overcoming deep reluctance within the London organisation, he got the blessing of General Secretary Antony Grey to start what was intended to be a compliant satellite, lobbying Northern MPs. Allan’s decision to use his personal address and phone number, which in its time was an act of considerable bravery, was deliberate. There were several Labour MPs in industrial constituencies who opposed decriminalisation because ‘the miners would not stand for it.’ Allan proved it was possible to run a Law Reform campaign from within a mining community without the sky falling in.

However, there was some personal cost in the reaction of the local gay community. He was shunned in the bars by people who feared he would bring the police down on them. His partner was warned that he should not be seen in public with Allan. They both ignored this.

Once the Sexual Offences Act was passed in 1967, the North West Committee, with Allan as Secretary and guiding force, could take wing. The HLRS collapsed largely because its mainly heterosexual supporters thought the job was done. In Manchester, by contrast, Allan had carefully built up a committee that increasingly consisted of gay men themselves articulating their own demands. He recruited in local gay bars such as the Rockingham, and involved bar owners. It was clear that what lesbians and gay men needed was not social workers but social facilities. They were not ill, they were isolated.

Esquire Clubs were to answer this need. Modelled on the Working Men’s Clubs of the North, they would be co-owned by members and offer a mixture of social, cultural and self-help facilities. For three years Allan and his lifelong friend, the journalist Ray Gosling, battled to get at least one club off the ground; but becoming a member of Esquire was the equivalent of outing yourself, and few signed up. Breweries that were initially interested backed out because Allan and Ray could not show enough support for the project. In several places, licences were refused because these would be publicly identified haunts of homosexuals, instead of the usual furtive backstreet set-ups.

In Burnley in 1971 CHE at Allan’s instigation set up a public meeting to confront the Christian alliance that opposed a local club. In a packed Public Library Allan invited all the homosexuals present to stand up and be identified. Over a hundred did so; it was one of the first mass coming-out demonstrations in the UK, certainly the first outside London. The skinheads who lined the wall (whom the police had deprived of their bovver boots and umbrellas as they arrived) were cowed. It was a symbolic coming-of-age moment for the gay movement.

Allan had suffered a severe heart attack in 1970, and increasingly took a back seat, becoming first Chairman and then in 1974 President for Life of CHE. However, part of his genius lay in recruiting the right people to shape the organisation from its small beginnings. In many ways Allan was like Clement Atlee in the post-war Labour government: a resolutely uncharismatic man of shining integrity who held together his star performers and his often-fractious troops through the personal respect he inspired.

There was one last hurrah. In 2000 Ray Gosling and Allan set up Gay Monitor, which recorded details of legal cases where allegations of sexual abuse on teenagers surfaced many years after the alleged offences, in accusations which appeared to be motivated by thoughts of financial compensation. The evidence led to CHE proposing a ten-year moratorium on such allegations in a motion to Liberty. Consequently Liberty disaffiliated CHE after having supported it for 45 years.

Allan remained a campaigner all his life. He sat on the executive of the National Federation of Bus Users in the 1990s, working for improved services and a proper Passengers’ Charter. He was also a prodigious letter-writer to The Guardian, The Independent and local papers. His subjects were anything from closure of toilets in bus stations (“the victims of homophobia and parsimony”) to the lyricist of “Stardust”, his style terse and sometimes hilarious.

Those who nursed him during his last illness described him as ‘a gentleman’, a word which attached itself to him all his adult life. A great campaigner, a great friend and a much-loved gentleman, he will be fondly remembered by all who knew him, and always remain a crucial figure in British LGBT history.