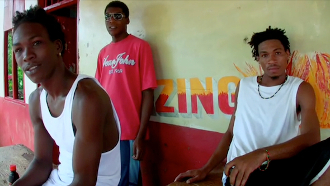 It’s not illegal to be gay in Jamaica but legal sanction is the least of your worries. Jamaican society is profoundly and murderously homophobic. This utterly compelling account of how ordinary LGBT people exist under these conditions was filmed on the island itself. Extraordinary stories of violence and the constant living in fear make for sometimes uncomfortable viewing. Interview subjects tell of the casual and relentless attacks; their faces are digitally obscured because there is nowhere for an openly gay person to be safe on the island. The relationship between dancehall culture and some of its notorious artists is well known. Using interviews with a wide range of Jamaicans and leading cultural figures in exile, this is a wide-ranging film which explores how Jamaica got to be this way, and how some people are working for change.

One baby in 2,000 is born with genitalia so ambiguous that no-one can tell if the child is male or female. Mani Bruce Mitchell, New Zealand’s first ‘out’ intersex person, takes us on a journey to meet some of those people. Most of the participants in Intersexion suffered numerous surgeries and treatments since birth in an attempt to ‘fix’ them and make their bodies fit the male/female binary. All now identify as neither male nor female. Their stories are often heartbreaking, frequently hilarious but always eye-opening. A powerful and important film which needs to be seen because, as Mani Bruce Mitchell says, ‘I hope this documentary will show everyone that the ‘shame and secrecy’ model hasn’t worked – and that intersex children can grow up to make informed choices about their own bodies.’ 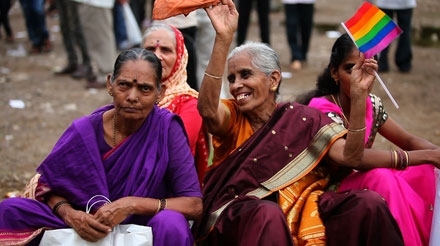 In 1860, under British colonial rule, Section 377 of the Indian Penal Code criminalised, among other things, homosexuality. In July 2009 the Delhi High Court repealed the clause in a landmark decision. Tulli, who graduated in South Asian Studies and has worked on several activist projects in India and Europe, follows three defiant Indian activists as they head to the first anniversary celebrations of the scrapping of 377 and share their personal stories, experiences of fighting the clause, and consider what a year of legalised homosexuality has brought.

Second prize: This is What Love in Action Looks Like, directed by Morgan Jon Fox 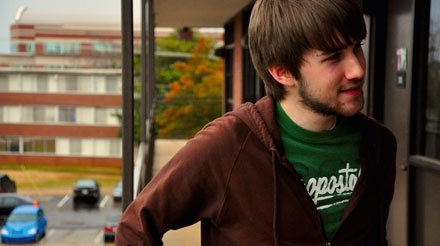 In the summer of 2005, parents of gay teenager Zach Stark packed their son off to Love In Action, an ex-gay ministry purporting to cure gay youths of their homosexual desires. Documenting the ordeal on his Myspace blog, word of Zach’s situation spread rapidly throughout the community, and as a small group of protesters began to grow outside the organisation, it was not long before the mainstream media showed an interest in Zach’s story and began to question the damaging nature of fundamentalist ex-gay programmes. Six years in the making, Morgan Jon Fox’s passionate documentary chronicles one of the most controversial cases in recent gay history, featuring interviews with the former director of Love In Action, several ex-clients and Zach himself. Whilst undoubtedly a sad and often shocking tale, this is ultimately a film about hope, celebrating the power of the community to rally together and incite political change.

For more about why these films were chosen, see our Press Release dated 2 April 2012.

Mutantes assembles a stunning array of personal archives and constructed footage, presenting punk interventions from leading players at the very forefront of the pro-sex movement, and closing with an experimental montage. 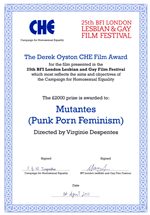 in America and Europe, bundled amidst the observations of eminent scholars of international reputation.

This year CHE also nominated a runner-up. On the 3rd of April, Nettie Pollard, another of

the judges, announced that the runner-up is We Were Here, directed by David Weiss­man, a heart-warming account of the San Francisco gay community’s early mobilisation around the AIDS epidemic, at a time when treatments were unknown.

2010 winning film: The Kuchus of Uganda 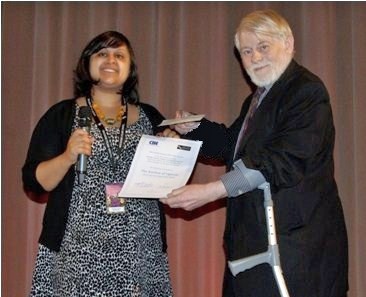 Following the showing of the film on 21st March 2010, the certificate, and a cheque for £2,000 was presented by Griffith Vaughan Williams, Secretary of CHE, to Nazmia Jamal, a programmer for the Film Festival, to be passed on to the film's director, Mathilda Piehl.

Particularly inspiring in light of changes in the law that happened after this film was made, this is a documentary about SMUG (Sexual Minorities Uganda), a group of radical LGBT activists who risk their lives in order to push for queer rights. 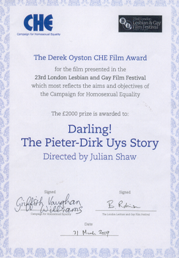 The award of £2,000 was presented to  the film's director, Julian Shaw, at at the main screening of the film in the LLGFF by CHE's Vice-President, the Broadcaster, Television Reporter and Gay Rights Campaigner Ray Gosling.

The other nominated films were:

A Place to Live: The Story of Triangle Square Dir Carolyn Coal

In This Our Lives: The Reunion Dir Topher Campbell

The CHE Film Award jury members in this inaugural year are: